Land of the Free: A History of Hardwood Floors in the United States 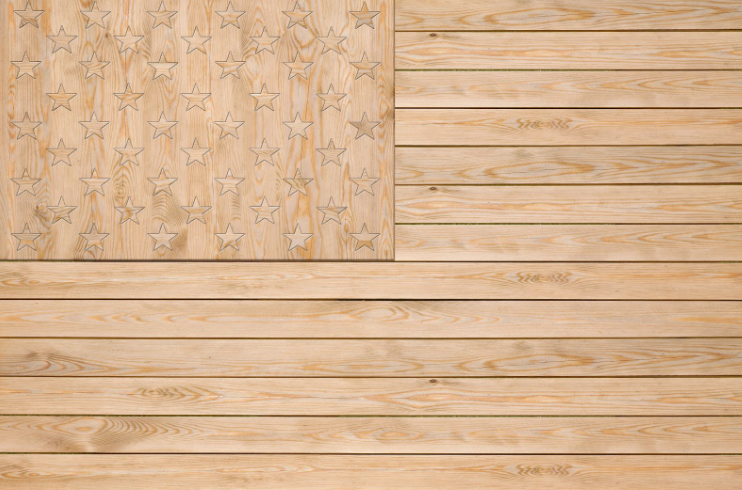 All of us here at Commercial Floor Services, and all craftsmen of the modern era, owe our professions to the legacy of our predecessors. In honor of that, let’s look at the evolution of hardwood floors and wood flooring in the United States.

Although wood has been used by humans for many millennia, wood flooring has been in use for a much shorter time. Old-growth forests allowed for much larger planks than we see in contemporary times. Often over a foot wide and sometimes in excess of 15 feet long, these original planks of wood were rough-hewn and unfinished. Given that every plank was processed with hand tools, it was faster and easier to make them as large as the wood allowed, thereby limiting the amount of overall work.

Although a vast upgrade over earthen floors, these predecessors to the modern style had a long way to go. The floors were uneven and rough. They were rarely sanded or treated in any way and required years of use to smooth the surface. Planks were also prone to swelling and shrinking, so boards that were simply butted together and nailed down would pull apart, causing gaps. While still an improvement, it would take time and technology to refine this building technique.

Royalty and the wealthy viewed wood flooring as a status symbol, and these design ideas and sentiments would migrate across the Atlantic from Europe with early colonial settlers. Intricate patterns were popular, giving rise to the parquet wood floor. This required the cutting, setting, and finishing off each piece of wood to be laboriously done by hand, and these works of art were available to only the wealthiest of the time.

Simple plank wood flooring for the middle class was also on the rise, however, fueled by early settlers’ access to the old-growth timber of North America. This allowed for the incorporation of wood floors in many Colonial American homes, although more often than not they were still rough-hewn and minimally finished.

The increased use and invention of modern milling equipment allowed timber manufacturers to produce lumber in increasingly exacting dimensions. Then, on December 27th, 1828, William Woodworth would patent his design for a combination planning and matching machine. This allowed the ability to not only mill planks to consistent dimensions, but also simultaneously shape the long edges of the boards. Now, builders had ready access to consistently sized planks that could be tightly fitted together before being nailed down. This eliminated the gaps that could appear from expansion and contraction. New finishing tools and products were also on the rise, such as the first motorized floor sander and Samuel Curtis Johnson’s finish wax, both at the turn of the 20th century. Modern wood flooring was beginning to come into its own.

Although the industrial revolution offered a multitude of Americans a new standard of living, including previously inaccessible luxuries like wood flooring, fortunes would soon change for hardwood. New materials, such as linoleum, were durable and affordable, and the looming Depression, followed by World War II, made wood flooring a less desirable option for some time. Shortly after the war, new synthetic fibers and a change to financial rules regarding mortgages helped spur the widespread use of carpets. Popularized by the upper class at the turn of the 20th century, carpeting was now widely available to middle-class Americans. Hardwood continued to fall out of favor until a renaissance in the 1980s, thanks to the revival of the Victorian and Craftsman styles.

Current technology allows for a variety of manufacturing and installation processes, and there is a multitude of finishing products and tools available. Hardwood is once again seen as a stylish and long-lasting option. This, and the remodeling of historic houses, have influenced countless homeowners to pull old carpet and linoleum up, often revealing original wood flooring underneath. Restoration of these lost treasures has become its own niche in the wood floor business.

Sustainable products and practices are also driving up consumer interest as wood flooring is now functional, stylish, and cost-effective. Once seen as an option only for society’s most wealthy, modern options offer practical solutions for many homes and budgets.

When you’re looking into wood flooring for your next build or renovation, don’t hesitate to reach out to us at Commercial Floor Services. We’re always ready to talk to you about this timeless option and how it can work for you!